We had a request to provide the contact information for Dr. Jasneet Parmar who delivered the excellent presentation on Caregivers Alberta at Founders Night.  Her information as follows:

In addition I am providing the link to Caregivers Alberta as follows:   http://www.caregiversalberta.ca/

Posted in General Gyro News | Comments Off on Caregivers Alberta

Members of the Sherwood Park and Edmonton Gyro Clubs

My thanks to each member of the Sherwood Park and Edmonton Gyro Clubs for making Founder’s night such an enjoyable evening.  The success of Founder’s Night would not have been possible if it were not for the exceptional contributions of those involved in organizing the event.  In particular, I would like to thank Ted Ewanchuk for co-chairing the evening and to Ken Lesniak for making the arrangements to hold the meeting at the Belvedere Golf and Country Club.  As well, the outstanding contribution by Milt Lanes and Dunc Mills for their efforts on the registration desk and for dealing with the issue related to the seating arrangements.  As usual, the Gyro members showed their remarkable ability to deal with this matter quickly and effectively.  While we expected 89 members, we had 96 members attend, which filled every seat.

The program began with the witty and entertaining presentation by David Winfield on dining.  This was followed by Keith Bradley’s Founder’s Night presentation, which acknowledged the contributions by Ed Kagy, Gus Handerson, and Paul Schwan for creating 107 years of Gyro friendship and fellowship.  Fred Schulte provided an interesting and informative overview of the history of the Edmonton Club, which was incorporated 98 years ago, just 12 years after the foundation of the Gyro Association.

Ted Ewanchuk introduced our guest speaker, Dr. Jasneet Parmar, Associate Professor at the University of Alberta, and a Director of Alberta Caregivers.  Dr. Parmar gave an important insight into a growing challenge within society of responding to the issue of caregiving.  As society ages, caregiving will become a serious challenge for everyone.  And, as noted by Dr. Parmar, society is not well prepared to handle this challenge.  As such, not only are those requiring care at risk, so too, are the caregivers.  Dr. Parmar advised that those faced with caregiving responsibilities could seek help and assistance from Albert Caregivers at website www.caregiversalberta.ca, or by contacting her personally at .

My apologies to Don Greig and Lloyd Wilson for not calling on them to comment on Cribbage Night and Curlarama, but since the meeting was into its fourth hour, it was decided to conclude the meeting.  Accordingly, I would ask Don and Lloyd to address these issues through email.

In conclusion, my thanks again to those involved in organizing Founder’s Night and to the Gyros who participated so effectively in the program.  My thanks as well to everyone who attended this event.

Posted in General Gyro News | Comments Off on Founders Night 2019

PRIZES: Prizes will be awarded to the winning & runner up
teams in each of four curling divisions.

If paying by cheque please make it payable to the Gyro Club of Sherwood Park.

Payment can be given to Erik Braun or Al Bleiken at the next meeting..

If you wish you may mail your payment to:
Erik Braun
Suite 116
69 Crystal Lane
Sherwood Park AB
T8H 2E9
Thank you,

A great day was had at Kleebaums, great food, super weather, and engaging competition. Thanks so much Gary! Gary’s helpers were hard working as usual thanks to Jim Copeland, Sid Slade, Herb Zmurchuk and Al Bleiken. The Bocce tournament had two winners the A Side with the team of Keith Bradley, Marian Phillips, Carol Kleebaum, and Bill Austin going home with wine and a taste of homemade horseradish and/or blueberry jam. The B Side winners were the team of Jan Bradley,Vic Syvenky, Terry Bajer, and Judy Govenlock, they went home with a six pack of beer and the homemade horseradish and/or blueberry jam. Congratulations to the winners a well fought battle.

Posted in General Gyro News | Comments Off on Outdoor Bocce

The Meeting was brought to order at 6:50 pm. Ken Lesniak led off with the Gyro song, followed by John William’s toast to the Queen. Gary Jones introduced his guest Bruce, and Scott Brisbin gave a thoughtful Grace. Dinner featured Chicken Schnitzel, which was excellent. Don Greg gave an extensive report on health and welfare in which he reported many of our Gyro members are making good progress back to good health. Don acknowledged the loss of Rick Lemieux’s wife and advised that a donation had been made by the Club on her behalf. Art Merrick reported his wife Judy was once again undergoing treatment for cancer. Lawrence Zaleski gave an extensive report on the history and status of Bill Carter’s health status and noted Bill would like to take some fellow Gyro’s money by playing Crib at his house. Al Bleiken read a letter of Thanks from Bill and Jeannie for all the support they received from Gyro members.

Al Bleiken then presented the Bowling trophy to Brian Wolfe, who chaired the winning team. The delay in presenting the trophy was caused by some minor repairs which needed to be done. Scott Brisbin won the 50/50. And John Williams gave a report on our next meeting which will be Poker Night. The meeting was adjourned. Garry Jones then introduced Al Bleiken as the Guest Speaker. As stated, the presentation on Global Terrorism was a fill-in for the cancelled Valentines Dance. Unfortunately, it was not as much fun as the dance would have been. The response to the presentation was good from the 22 Gyros attending the meeting and some important questions were raised on terrorism. Several members asked for a copy of the written report on terrorism, which I have attached for Gyros who attended and those who were away.

All in all, another good Gyro meeting.

Thank you and have a good day.

Posted in General Gyro News | Comments Off on Global Terrorism

Good night at Caffrey’s in the Park, great turnout and good food and entertainment. Thanks Paul and Rick. Seems the winners of the tournament and a bottle of wine were Brian Wolf and Terry Bajer with wine going to the runners up also which was the team of Lawrence and Lloyd. Got some pictures not that great in a smoky old pool hall!!  The shark, the winners and the wanabe winners. 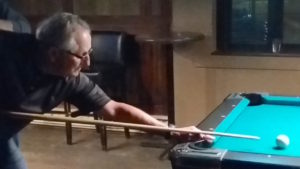 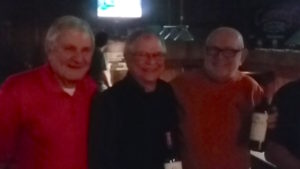 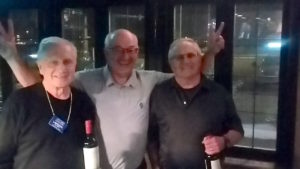 Posted in General Gyro News | Comments Off on Billiards

Our report for Crib Night follows.

This year Crib Night was slotted near the beginning of our year which I think helped in getting 29 members out of which included 2 proposed members; Brian Wolfe and Ian Bannatyne. Past years the meeting has been held in March and attendance was lower because of members seeking sunny and warmer weather. It should be noted that Bill Carter and Jack Beattie were in attendance and stayed right to the bitter end; great to see them both out and being able to participate again at meetings.

Dorne and myself thought it might be faster to play teams rather than singles which we thought would result in faster play. The format was double knock out with a winner for A side and B side. We assigned members attending to their teams and started play before dinner. Play continued after dinner until winners were declared at around 9:00 pm. A side winners were Jack Beattie and Lloyd Wilson, B side winners were Earl Korber and Peter Elzinga. Each winner picked a bottle of wine to take home as a prize; the cost of which was our program budget. Someone was heard to say. “Doesn’t Lloyd loose at anything.”

Both Dorne and I felt it was a good meeting and well attended which should continue as it was this year in November. 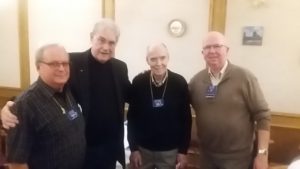 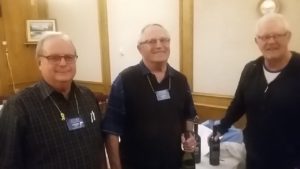 Posted in General Gyro News | Comments Off on Crib Night

Three teams from Sherwood Park took part in the annual Gyro curl-a-rama in Banff in November this past weekend. Team 1 was lead by Lloyd Wilson with Jim Mallot, Roger Delveaux, and Ted Ewanchuk after a disappointing start they started winning, playing four games (six ends) on Saturday and went into the semi final where they were down by three in the final end and skip Wilson came through with a four ender to win the game and advance to the final on Sunday where they crushed their opposition to win the C event final. 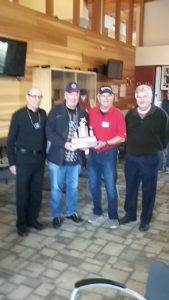 Team 2 was Bill Austin, Ray Davis, Don Greig, and Paul West. Losing the first game woke us up and we followed through with consecutive wins taking us to the semi final of B event on Sunday morning. A good close game came down to the last rock of the final end needing a draw to the four foot to tie the game, accomplished. Then down to the skips drawing to the button for the win, accomplished. On to the final and another win for Sherwood Park 2 Event B winners.

Team 3 was lead by Milt Lanes supported by Dick Caddey, Dorne Hunt, and Art Merrick. Another rocky start saw them drop through the ranks to the D event where they followed their leader into the final on Sunday with the third event win by a Sherwood Park Team. 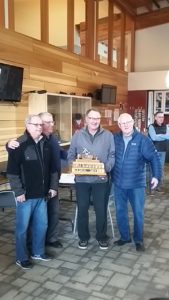 Great event, lots of fun. Converted a rusty nail virgin and listened to the sixth end story endlessly from a slightly inebriated skip. Now where do we keep three trophies???

Hi all, I talked to Jeanne again today and she advises Bill is still holding his own. He remains in ICU and therefore No Visitors. She will advise when he is up to seeing friends when he is out of ICU.

After his initial surgery on Monday night, he again underwent another surgery on Wednesday to install an Ileostomy which will assist him in collecting bowel activity.

His Blood Pressure is quite high and they are monitoring that.

He has a breathing tube which he is not comfortable with but is necessary.

All of this is complicated by the fact that he has Diabetes.

Jeanne was finally able to return home last night and gain some much needed sleep. This was only made possible because they sedated Bill to sleep last night – he has been busy fighting the breathing tube in his sleep.

We know both Bill and Jeanne are fighters but you will agree they have been handed a full plate this year. Bill’s surgery this coming Thursday to remove his Colostomy has now been postponed….

When I know more, I’ll send it along to you.